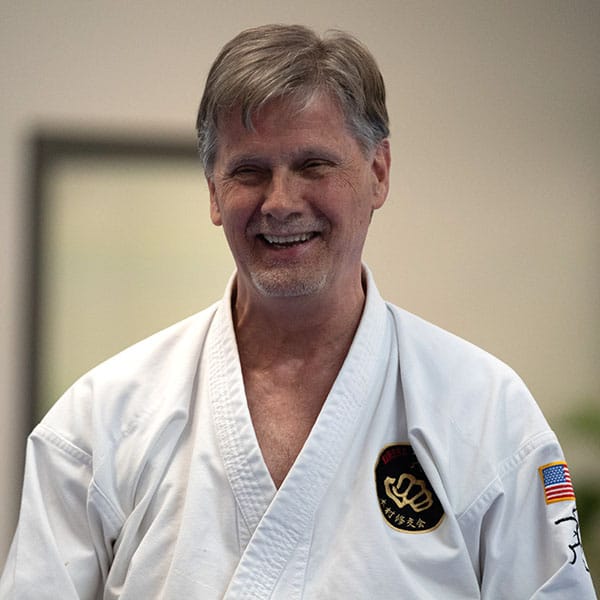 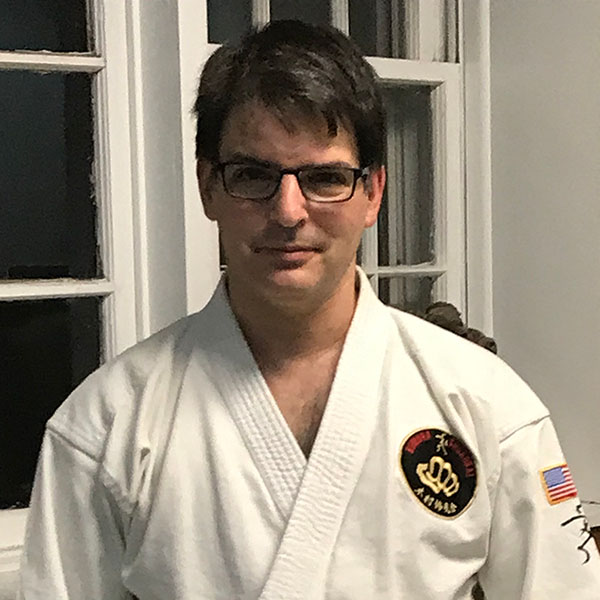 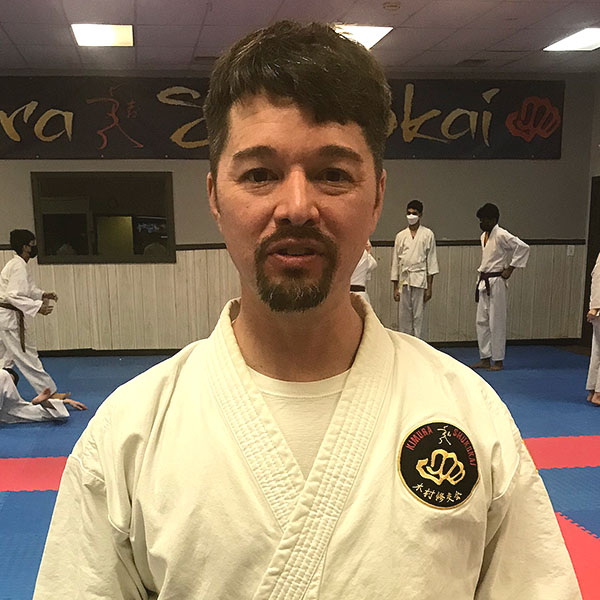 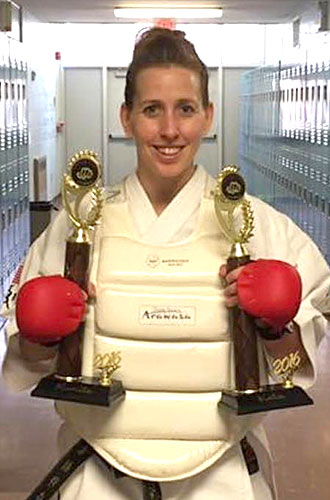 Sensei Jana Siperstein-Szucs is a Fourth Degree (Yondan) Black Belt that has been training under Shihan Bill Bressaw for 18 years (started in 2004). Sensei Jana has been teaching karate and women’s fitness for over 14 years. She has won multiple local tournaments and placed in many World Tournaments.

After completing my Masters program, I moved back to New Jersey and helped run the family business. I finally learned what real stress was. I had previously done cardio kickboxing which I enjoyed, but didn’t like the fact that I wasn’t learning any real self defense. When I found Bressaws Middlesex Karate, I was instantly in love. I would drive to karate and my head would weigh 1000 pounds. As soon as my foot hit the mat I went on a temporary vacation.

I trained every opportunity I could; I went to both dojos for every adult class that was offered. My first World Tournament was in Finland in 2006 and it was incredible. When I started teaching in 2007, I found what I have been missing my whole life. I was helping people become confident and strong! Teaching was even more rewarding.

In 2009, there were a group of women that wanted to learn karate, but were not allowed to attend co-ed classes for religious reasons. Sensei Jessica and I started the “Women’s Only Fitness” classes and it has been running strong since. 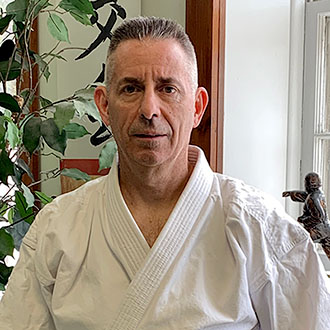 Tom spent nearly 20 years training at Bressaw’s Middlesex Karate, directly under Shihan Bressaw. As an assistant instructor for much of that time, Tom has extensive experience teaching a wide range of students. He’s participated in multiple international training seminars, won medals at local tournaments, and competed as part of the U.S.A. Kimura Shukakai Team during the 2012 World Tournament in Atlantic City. Tom is active in the local community, serving as one of the Hopelawn fire commissioners.

Tom credits karate for his good health, and positive outlook as Bressaw’s Karate has helped him battle and overcome a serious health condition. He has a passion for helping all students achieve their highest potential and endeavors to instill a sense of personal courage through the practice of karate. 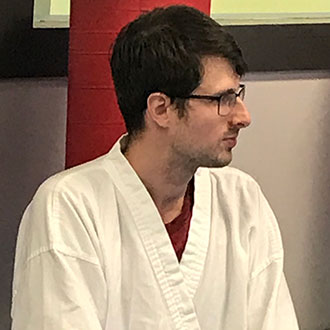 Shihan Bressaw’s son. Chris has trained for more than 30 years and for most of those years since a teenager has assisted with teaching. Currently assisting in both Edison and Fords locations he has competed in many national tournaments. Chosen to compete in Kimura Shukokai International tournament held in Atlantic City in 2012.

Highly educated with multiple college degrees, experienced in middle school teaching and a medical sonagram technician. He loves to get into detail and has a unique and positive way of communicating to children of all ages. 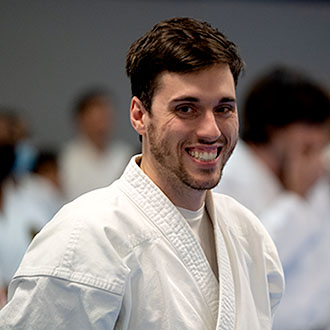 Morgan has been an assistant instructor for more than 8 years at the Edison dojo. Morgan earned his 3rd degree black belt in 2018 and has been training for nearly 20 years. He is a two-time medalist in our KSI World Tournaments and also regularly competes and referees in local tournaments.

He was chosen to represent American Shukokai Karate in many times and won multiple medals in national and world tournaments. He is very detailed in his instruction to everyone especially children. A very fine asset to our teaching staff.

Professionally, Morgan works as an architectural consultant in New York City, focusing on all phases of design. Like karate, the discipline of architecture involves strict attention to detail, collaboration and the sharing of knowledge. 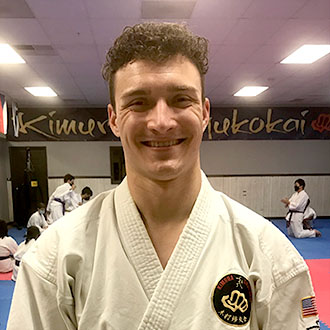 Jerald started training at our Fords dojo in the fall of 1998 at the age of 5. Jerald first represented the American Shukokai Karate team at the world tournament in Finland in 2006 where he won silver in sparring. He has since gone on to compete in many more world tournaments in countries like Germany, Sweden, and Portugal. He earned his 3rd degree black belt in 2016 and has trained at our schools for over 23 years, while routinely competing and refereeing in local tournaments. Jerald has been an Assistant Instructor for over 7 years.

Outside of karate, Jerald attended high school at Middlesex County Academy for Science, Mathematics, & Engineering Technologies. He then went on to attend Rowan University where he graduated with a degree in Mechanical Engineering in 2015. He has since started work on earning a Master’s degree in engineering. Jerald also earned the rank of Eagle Scout from the Boy Scouts of America in 2011. He credits karate for teaching him the determination and work ethic he needed to achieve these accomplishments. 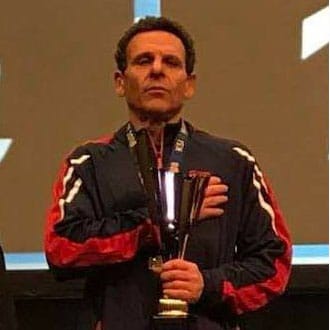 Jon earned his second degree black belt in 2019 and has been training since 2006. He joined the dojo at the age of 44 to support his son's interest, but has been enthusiastic about karate ever since. He credits the culture of self-perfection he learned at the dojo with enabling his 80-pound weight loss, which he accomplished between earning his 1st and 2nd degree ranks. Jon has also competed locally and internationally in tournaments, earning second place in the finals of the lightweight super-veteran's division in sparring at the 2018 World Tournament in Stockholm Sweden.

When Jon is not teaching or training in karate, he is a professor at Ocean County College, teaching cybersecurity and database management in their Computer Science department. His ambition in all of his teaching is to pass his skills and experience along to a new generation. 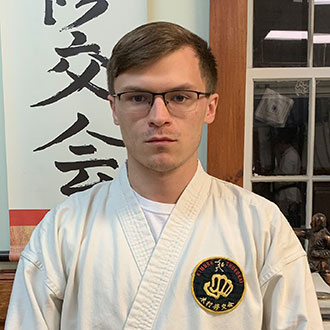 Andrew is currently attending college and serves as a link to younger students who aspire to his role model. Andrew has 5 years teaching experience at our Fords location, has competed in many national tournaments and is a real asset to our teaching staff. His compassionate and sensitive ways really connect with the younger students. 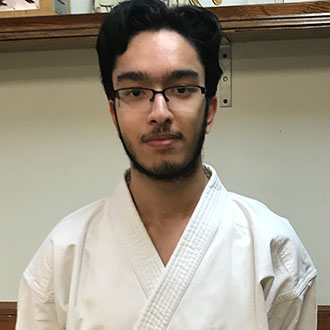 Pravin is currently attending college, serves as a link to younger students who aspire to his role model. Andrew has 3 years teaching experience at our Fords location, has competed in many national tournaments and is a real asset to our teaching staff. He is very meticulous in his teaching methods to all students. 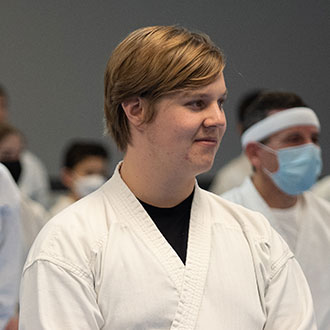 Damien is currently attending college for engineering has trained in our schools for more than 12 years. His assistant teaching in our Edison location brings a great connection to the younger students by devoting much time to help them achieve their dreams in martial arts.